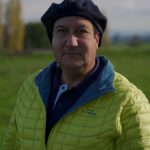 Professor of the Workshops of, Resources and Media and Workshop of Audiovisual Production for Education, Universidad Mayor de Temuco, Audiovisual Communication Career. Temuco – Chile (2004 to 2008)

It is distinguished as Chevalier and Bronze Medal, (2015) by: L’Ordre Mondial de L’academie Culinaire de France, in Alliance with the Ministry of Agriculture, Alejandro Novella Vilches, for his research, dissemination and commissioning Chilean Gastronomy value. -.

The High Distinction of “Custodian of Chilean Cuisine” is given to Alejandro Novella Vilches, in his capacity as Creator and director of the Research and Dissemination Program “RECOMMENDING CHILE”. Delivered by INIA. (National Institute of Agricultural Research, Ministry of Agriculture. Year 2017

In 2018, the “Guilde Internationale des Fromagers” of French origin, the largest in the world, appoints Alejandro Novella Vilches as a member for his outstanding contribution in local and artisanal cheese promotion in chile and around the world.

Since 2019 he has been part of the jury at ART & TUR – International Tourism Film Festival, in Portugal. Since its 1st edition in Barcelos in 2008, the ART & TUR Festival has effectively fulfilled its mission of making known to the world the best audiovisual productions in Portugal and in the world.

Art & tur, is an official member of the International Committee of Tourism Film Festivals – CIFFT, since 2008. https://tourfilm-festival.com/en