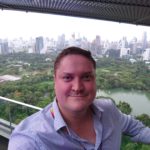 Jason Fiddler (@jasonjlfiddler) is the founder and director of the Durban Gay & Lesbian Film Festival (est. 2011). An avid film fundi, Jason has also been involved with conservation since, at age 10, he helped with fundraising for the endangered Riverine Rabbit. In high school he debated against mining in Northern KZN beach dunes and continues to support conservation efforts globally. His human rights stance led to a drive for local LGBTQ+ community events in Durban and continued support for emerging local and international filmmakers. Having been involved with tourism since ’94, Jason has attended 21 consecutive Tourism Indaba’s since 1998 and has spoken professionally at a number of tourism events.