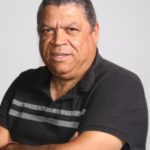 Johann Abrahams is an award-winning journalist and filmmaker whose current affairs stories have made local and international headlines. He is the former Executive producer of an investigative journalism programme, Special Assignment which airs on SABC 3. He has a broadcasting and film degree from the University of Kansas in the USA, and has a Masters degree from UCT in Media Theory and Practice. After working for KSNT in Topeka, Kansas as a video journalist (1993 -1994) he came back to South Africa. He joined the SABC’s, Cape Town office in 1994 where he worked as a cameraman and reporter. During this time he has covered a variety of stories in the Western Cape especially giving voice to the rural poor communities. Johann has also travelled extensively covering conflict and stories in Rwanda, Malawi, Russia, Brazil, Namibia, Bali, Angola, Tunisia, and Nigeria. After leaving SABC in 2011 he became a freelancer and continued to produce news documentaries, wrote several screenplays, directed crime docudramas, corporate videos, and a 13-part history series about the Khoekhoe herders. He currently works with Moja Media based in Cape Town where he is a senior producer working on content for BRICS TV and other broadcasters. The most recent project is with Hollywood based Cine Libre Studios, on a joint feature film project titled, Chain of Voices, as producer.